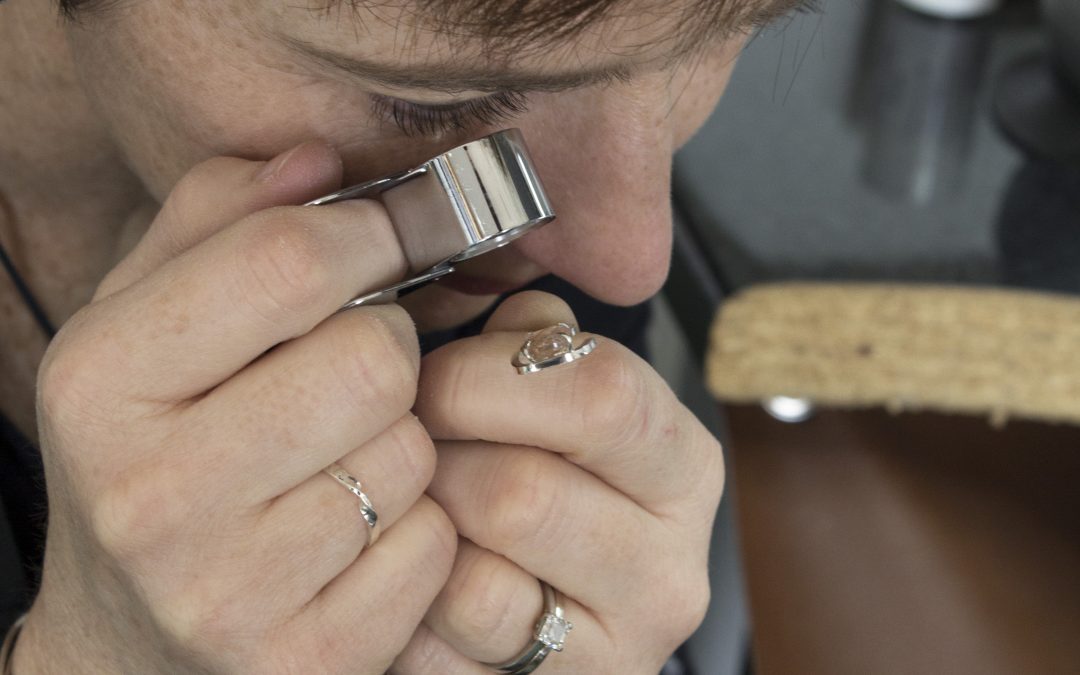 When you imagine a gemmologist, you may think of someone peering closely at a gem, trying to uncover its secrets. It’s true that the first tool that most gemmologists turn to is their loupe. An eyeglass that magnifies by a factor of 10, the hand held loupe is probably one of the single most useful tools that any gemmologist has. It’s cheap, portable, and can by used anywhere, assuming that there is some light available. It’s also the starting point for finding out about a gem, whether you want to know what gem it is, what its origins are, or whether it could be considered to be high quality.

What is it that makes a gem beautiful? That may vary depending on the cultural context, but there are some features that can easily be assessed with the naked eye and / or a loupe that can help you start to build up a picture. What shape is the gem, how has it been cut? What colour is it? How saturated (strong) is the colour? Can you see through it? Is the inside of it clear or does it have a lot of included material (other substances trapped inside the gem at the time it was formed). All these can give some clues as to the nature and quality of the gemstone.

Sometimes these observations can also help us to tell whether a gem is naturally formed or synthetic. For example, synthetic sapphire often looks quite clear inside to the naked eye. Looking closely with the loupe may reveal curved growth lines indicating that it was manufactured rather then mined. Whatever one’s preference, it is helpful to know how to tell the difference as the value of these stones will differ hugely. A moderate sized sapphire of natural origin which looks clean inside will be worth thousands, whereas a synthetic sapphire of the same size may only be worth pennies.

I have become quite attached to my loupe. It now comes with me anywhere I might come across gemstones, and I’d be lost without it……