The many shades of quartz 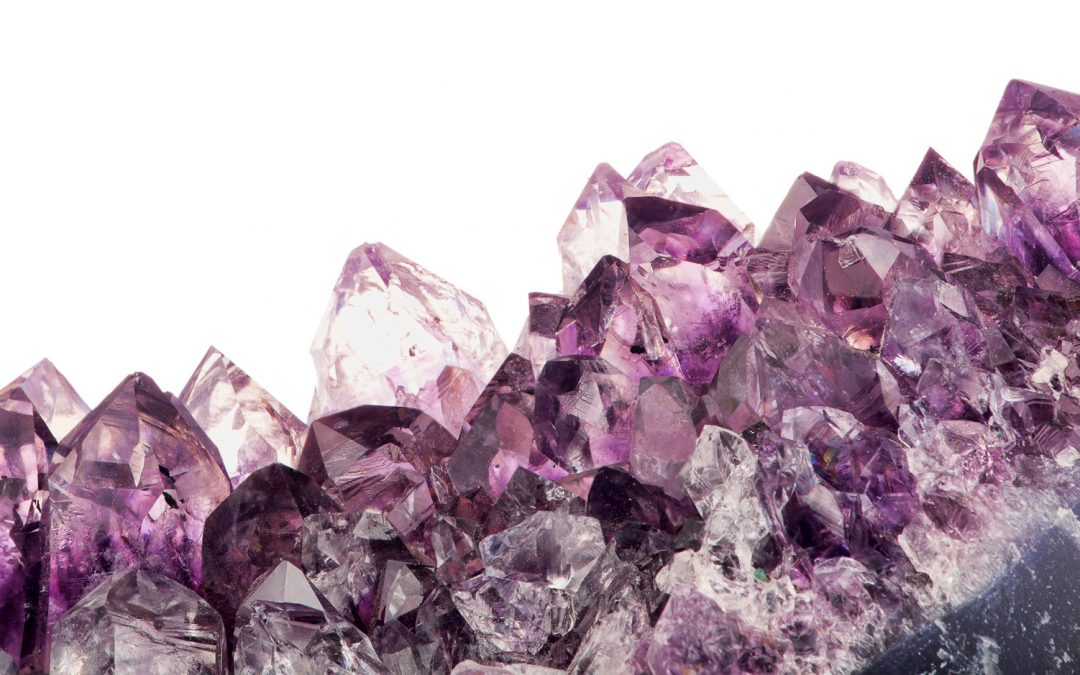 Quartz is composed of silicon dioxide, which is also known as silica. It is widely found, and indeed is the Earth’s second most abundant mineral. It occurs in two main types, crystalline (made up of single large crystals), and polycrystalline (made up of lots of tiny individual crystals). The two forms look quite different and have very different properties.. Crystalline quartz is possibly the most widely recognised form of quartz. It occurs naturally in a variety of colours including rose quartz (pink), amethyst (purple), citrine (yellow), prasiolite (green), smoky quartz (brown), and rock crystal (colourless). It is affordable, and widely used in gem-set jewellery.

Amethyst is one of the most valued varieties of quartz due to its rich purple colour. The colour is often not competely uniform throughout the stone, with colour variations often visible in larger stones.  It is often seen in geodes (small cavities of rock lined with crystals), with the crystals showing a more intense purple colour at their tips compared to their colourless bases. Inclusions such as partially healed fractures are common. Citrine is the yellow form of quartz, and its colour can vary from a pale yellow (sometimes known as lemon quartz) to a deep orange. It is often produced by heat-treating amethyst, as citrine occurring naturally is not common. (Conversely, amethyst can be produced by irradiating citrine!) A variation of citrine and amethyst which displays both purple and yellow colour zones is called ametrine.

Prasiolite is the green form of crystalline quartz. It can occur naturally but is rare, and much of the commerceally available prasiolite is formed by heat-treating certain types of amethyst. The commonly used term “green amethyst” is felt to be misleading by gemmologists, and should be avoided. Rose quartz varies from pale to deep pink. The colour of smoky quartz varies from deep brown or black to smoky yellow, and can be altered by irradiation.

Certain specimens of crystalline quartz contain tiny needle-like inclusions. When these are orientated in a particular way one can see an optical effect called asterism, with rays of a star visible when the stone is moved below a light source. This is not unique to quartz, and can also be seen in other gemstone material. When looking after your quartz jewellery. make sure you avoid leaving it in strong light (especially sunlight) as colours may fade.

Many of the quartz gemstones that I use for my jewellery have inclusions of other minerals, which I find absolutely fascinating. Each one is different, and has its own story. Some of the selection I have  used recently in my jewellery include rutile which appears as gold coloured fine linear inclusions, pyrite (also known as fools gold) with irregular flecks of shimmering material suspended in the clear quartz, tourmaline which is seen in its crystalline form as long. thin black crystals with a rounded triangular cross section, and iron-containing minerals which look deep red or orange. Follow the shop link on my website for my latest quartz pieces.